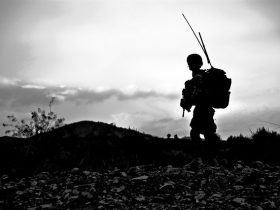 Scientists express alarm over the invasion of American bullfrogs along the Yellowstone River in Montana.

A Recent survey showed that the bullfrogs have been found along a 66-mile stretch of Yellowstone River in 2013, in comparison to roughly 37 miles in 2010. The number of breeding sites was also found to have increased from 12 in 2010 to 45 sites last year.

US Geological Survey biologist Adam Sepulveda said the bullfrogs pose a threat to biodiversity as they are all hungry and eat almost anything that fit into their mouth, including other bullfrogs.

Amphibian populations around the world are on the decline. Since they favor wet marshlands, the rising temperatures and drought conditions eliminate their natural habitat where they can also mate and raise offspring.

However, the American bullfrogs are apparently not affected by climate change. Instead of being on the decline, they reproduce and spreading rapidly particularly at the Yellowstone River.

Reports said efforts of state and federal agencies to contain the bullfrog invasion have so far unsuccessful after the number of bullfrogs overpowered their efforts. The agencies are not trying to create a strategy to at least contain their spread.

Aside from eating other frogs, scientists said the bullfrogs also out-competing other animals for food and suspected to be responsible for the spread a fungus believed to cause a significant decline in amphibian populations.

Sepulveda said the impacts of the spread of bullfrogs to the native amphibians in the Yellowstone River are not yet identified, but native Northern leopard frogs are likely to be most vulnerable to the bullfrog invasion because of the similarities of their habitats.

Recent survey showed that the bullfrogs have been found along a 66-mile stretch of Yellowstone River in 2013, in comparison to roughly 37 miles in 2010. The number of breeding sites was also found to have increased from 12 in 2010 to 45 sites last year.

The bullfrog, which can grow to up to 12 inches, are native to the eastern part of the United States but have spread to nearly every state but North Dakota.

Scientists believe they were released by humans in eastern Montana as pets or tadpoles used by fisherman as bait.