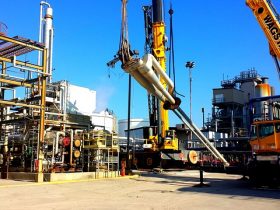 The world’s population is increasing hence the demand to boost food production also increases and for the last 50 years, there have been no problem when it comes to food production. With the use of advance technology in the field of agriculture, more crops are being produced to meet the world’s need.

Christopher Kucharik, from the Nelson Institute Center for Sustainability and the Global Environment at the University of Wisconsin-Madison and his team of researchers showed how the increased in food production resulted in the seasonal increase of carbon dioxide.

Apparently, a new research shows that intensive farming, although it has positive effect to food production has some negative impact to the earth’s atmospheric carbon dioxide level.

Christopher Kucharik, from the Nelson Institute Center for Sustainability and the Global Environment at the University of Wisconsin-Madison and his team of researchers showed how the increased in food production resulted in the seasonal increase of carbon dioxide.

According to Kucharik and his team, there is a fluctuation of carbon dioxide during autumn and winter, the time when plants mostly released back CO2 into the atmosphere. Normally, plants absorb the sun’s energy into food during spring and summer and released it the following seasons. Since the production of crops say in the Northern Hemisphere increased by 240 percent, the released gas is also bigger.

Kucharik explains, “Here we use production statistics and a carbon accounting model to show that increases in agricultural productivity, which have been largely overlooked in previous investigations, explain as much as a quarter of the observed changes in atmospheric CO2 seasonality.”

Furthermore, the researchers found that cropland in the Northern Hemisphere is responsible for the 50 percent rise of greenhouse gas. Two thirds of these are coming from corn plants.

As Kucharik added, Corn once again is king, this time demonstrating its strong influence on the seasonal cycle of atmospheric CO2.

Ning Zeng, from the University of Maryland and an Atmospheric scientist conducted his own study and found that agricultural revolution contributes to amplified seasonal swings in carbon dioxide cycles.