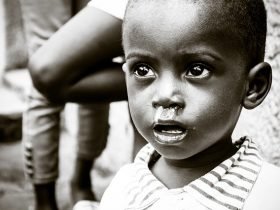 A new study has found evidence of social learning in chimpanzees – one of the first instance of such an event actually witnessed. Chimpanzees are one of our closest biological cousins among the primates, and as such they’re always been a subject of close study.

Wild chimps do of course use tools due to their high level of intelligence, curiosity and resourcefulness, and these behaviors can differ from one group to another.

That close examination has paid major dividends after researchers watched the use of tools spread throughout a wild chimpanzee community in the Budongo Forest of Uganda.

Wild chimps do of course use tools due to their high level of intelligence, curiosity and resourcefulness, and these behaviors can differ from one group to another, something that University of St. Andrews pyschcology lecturer Dr. Catherine Hobaiter said. Most of these variations from population to population were spread through each community from chimpanzee to chimpanzee, Dr Hobaiter added, but this is the first instance of actually watching the process happen instead of finding a chimpanzee community where the behavior had already been spread generations ago.

The chimpanzees of the community being studied developed two variations for a technique called leaf-sponging, where the ape would dip leaves they had folded in their mouths into water to drink from. The variations, reusing leaf-sponges and using moss instead of leaves to create a moss-sponge – were developed by two different chimpanzees; this is the first record in over two decades of these two new techniques.

Chimpanzees are highly social creatures and can form communities of up to as many of several dozen apes. Their habitat can range from grasslands, woodlands and rain forests in Africa, but few research studies rely upon groups of wild chimpanzees and instead rely upon communities in captivity, making this current study even more noteworthy in addition to its groundbreaking findings.

The results of the study point to a social learning aspect of behavioral tool use among wild chimps, something that many researchers have felt was a prerequisite for the development of advanced cultures. This social learning is just one more link between humans and apes in the form of a common ancestor that had the same proclivities, researchers added.